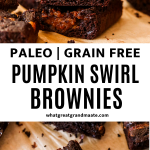 Rich and decadent pumpkin swirl brownies are guaranteed to be one of your new favorite grain free and paleo Fall desserts! So easy, beautiful, and incredibly addicting.

It’s the time of the year when we incorporate pumpkin into all our favorite desserts. Not only am I a huge fan of pumpkin, but it adds such an amazing, moist texture to baked goods. For this easy and delicious grain free brownies recipe, I combined chocolate and pumpkin, which are one of my top favorite combos.

I’ve seen many paleo pumpkin brownies recipes before and they usually infuse the pumpkin into the brownie batter. You’ll never know that the pumpkin is in there unless you tasted them. For this version, I decided to do the same, but also created a fun pumpkin swirl that you can see on top of the brownies. The result is a beautiful marbling effect, and these grain free dairy free brownies are so wonderful and addicting.

How to Make Paleo and Gluten Free Pumpkin Swirl Brownies

These paleo pumpkin brownies are actually a lot easier than they look and do not take too long in the oven! Here’s how to make these grain free brownies recipe with pumpkin swirl on top.

Once these paleo and gluten free pumpkin swirl brownies are cool, you can slice and enjoy! So fun and delicious. 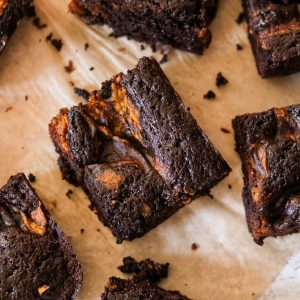 Regarding other affiliate links and affiliate relationships: In order for me to support my blogging activities, I may receive monetary compensation or other types of remuneration for my endorsement, recommendation, testimonial and/or link to any products or services from this blog. Thank you for your support and understanding.

This site uses Akismet to reduce spam. Learn how your comment data is processed.

I’m Jean and I’m a Nutritional Therapist (NTP) living in Southern California with my husband and 2 dog babies. On WGGA, you’ll find simple and easy gluten-, dairy-, and processed sugar-free recipes that focus on quality nutrients, and of course, never sacrifice on taste. I believe that the food you love should love you back, making you feel amazing inside and out. I apologize in advance for my inappropriate jokes and misunderstood sarcasm! More About Jean